With its superb resources in research and development, NCKU has been able to forge a super-link between industries, government, and academia after the establishment of the Southern Taiwan Science Park. (Courtesy of NCKU Introduction)

Rising from the ruins of post-WW2, Taiwan has successfully transformed itself from an agricultural colony to the largest manufacturer in the information and communications technologies industry. The Taiwan Economic Miracle would have never come true without the firmly built foundation of a national infrastructure, as well as the combined efforts of both the state-owned corporations and the small and medium-sized enterprises. Along with this explosion of industries, the NCKU alumni shine from their fields during this period—from machinery manufacturers, home appliance manufacturers, China Steel Corporation, CPC Corporation, chemical industries, to the information and communications industry. Notable alumni, including W.Y. Chen (Berlin Co, Ltd.), Bruce Cheng (Delta Electronics, Inc.), Shou-chuan Ho (YFY Inc.), Li-Ping Zhou (Makalot Industrial Co, Ltd.), Miin Wu (Macronix International Co., Ltd.), and Peter Chen (Qisda Corporation), have taken up the burden of upholding Taiwanese industries development with their pragmatic temperament and down-to-earth professionalism.

Starting as an engineering college, NCKU is home to outstanding engineering faculty and professors, as well as well-furnished machinery workshops. According to the motto “Engineer always near engine” coined by Prof. Cheng-Jeou Ma, most alumni of the Department of Mechanical Engineering have aspired to become the pioneers of industrial development in Taiwan, taking up their careers in many notable Taiwanese OEM companies or manufacturers such as Leadwell CNC Machines Mfg., Corp., Accutex Technologies Co., Ltd., Sampo Corporation, and TECO Electric and Machinery Co., Ltd.

As a noteworthy exemplar, Hsin-I Lin, the Vice Premier of Taiwan between 2002 and 2004, is an alumnus of the Department of Mechanical Engineering. His career began in vehicle manufacturing, including automobiles and locomotives. Later on, he assisted China Motor Corporation to break through various technical bottlenecks, improve the corporation’s assembly line system, and implement the latest management science knowledge to turn CMC into one of the top automobile sellers in Taiwan. During the start of the 21st century, Lin steered his career into politics, where he assumed office as the Minister of Economic Affairs, and later the Vice Premier of the Executive Yuan, to bring the economy of Taiwan to new horizons.

In 1966, Taiwan established its first export processing zone in an effort to attract foreign capital and technology by means of low-cost labor and policy incentives, leading to the rapid emergence of labor-intensive light industries in Taiwan, such as the textile industry and its derivative sectors. In the 1970s, the government launched the Ten Major Construction Projects, laying a firm foundation for the advent of the heavy industries in Taiwan such as the petrochemical industry, the steel industry, and the shipbuilding industry.

In June 1977, the blast furnace at the Kaohsiung Steel Plant of the China Steel Corporation (CSC) was ignited for steel refinery, symbolically kicking off Taiwan’s transition from light industries to heavy industries. Under the leadership of Yuan-Cheng Chen, an alumnus from the Department of Mining and Metallurgical Engineering, the furnace was secured from a ravaging typhoon in the same year. In 2005, Chen served as the General Manager of China Steel Corporation, succeeded by Hong-Nan Lin, an alumnus of the Department of Systems and Naval Mechatronic Engineering. In April 1978, as a result of the concerted effort of the drilling team of the Chinese Petroleum Corporation and China Steel Corporation, Taixi No. 1 Oil Well became the first oil producer in Taiwan. The many unsung heroes leading the team were all alumni of the Department of Mining and Metallurgical Engineering, NCKU.

The petrochemical industry is a fundamental industry highly related to people’s livelihood. According to suggestions of the advisors from Purdue University during the US-Aid Period, NCKU improved the teaching environment and curriculum of the Department of Chemical Engineering, including the establishment of the laboratories for unit operation and procedure and the procurement of the latest textbooks. This improvement paid off in the cultivation of a generation of outstanding chemical engineers needed for industrial elevation in Taiwan. Meanwhile, many distinguished alumni from the College of Engineering, including Chih-Tsun Lee and Chao-Lin Yang, have made major achievements for the Formosa Plastic Group since its founding era. Together, these alumni assisted in R&D for the establishment of the first factories, warranted the corporation’s development in the United States, and overcame various crises of the No.6 Naphtha Cracker Complex. Owing to their persistent hard work, Formosa Plastic Group was able to expand and thrive for the following decades as one of the biggest corporations among the global petrochemical industry.

Adhering to national policy, NCKU has also become a key institute for the cultivation of specialists and talents in information and communication technology. Even two decades prior to the policy, NCKU had already independently developed an electronic computer named “NCKU No.1” in the 1970s, which was the predecessor of “Microprofessor I (MPF I),” the pioneer of Taiwan’s modern computer development. Revered as key figures in the history of modern computer development, NCKU alumni Chung Laung Liu and Richard C. Chu have significantly contributed their works to the research and innovation of both software and hardware, making smaller and more intelligent computers possible.

Chun-Yien Chang, an alumnus of the Department of Electrical Engineering, was a forerunner in Taiwanese research on semiconductor technology. He participated in the establishment of Taiwan’s first semiconductor research center, and has led the National Submicron Device Laboratories, which is the birthplace of the first integrated circuit in Taiwan. With his numerous contributions, one can even say that Chang is one of the founding fathers of Taiwan’s semiconductor industry.

In 1995, the Southern Taiwan Science Park was established in Tainan with immense support from the National Cheng Kung University Alumni Association of North America (NCKUAANA). Today, NCKU holds the logistic advantage for being at the center of three high technology industry districts—the Southern Taiwan Science Park, Kaohsiung Science Park, and Tainan Technology Industrial Park. Based on its superb R&D resources, NCKU serves to bridge industries, government, and academia to promote an array of technology-intensive products, including optoelectronics, semiconductor wafer, LCD panels, and biotechnological medical equipment. With their constant effort, NCKU alumni thrive in every industry, sector, and business. Together, they push for the advent of Taiwan’s next period of economic prosperity.

A 1951 group photo taken at the Ge-Zih Auditorium. (Donated by Hu Fei-Peng Hu, Class of 1951; Courtesy of the Dept. of Mechanical Engineering, NCKU) 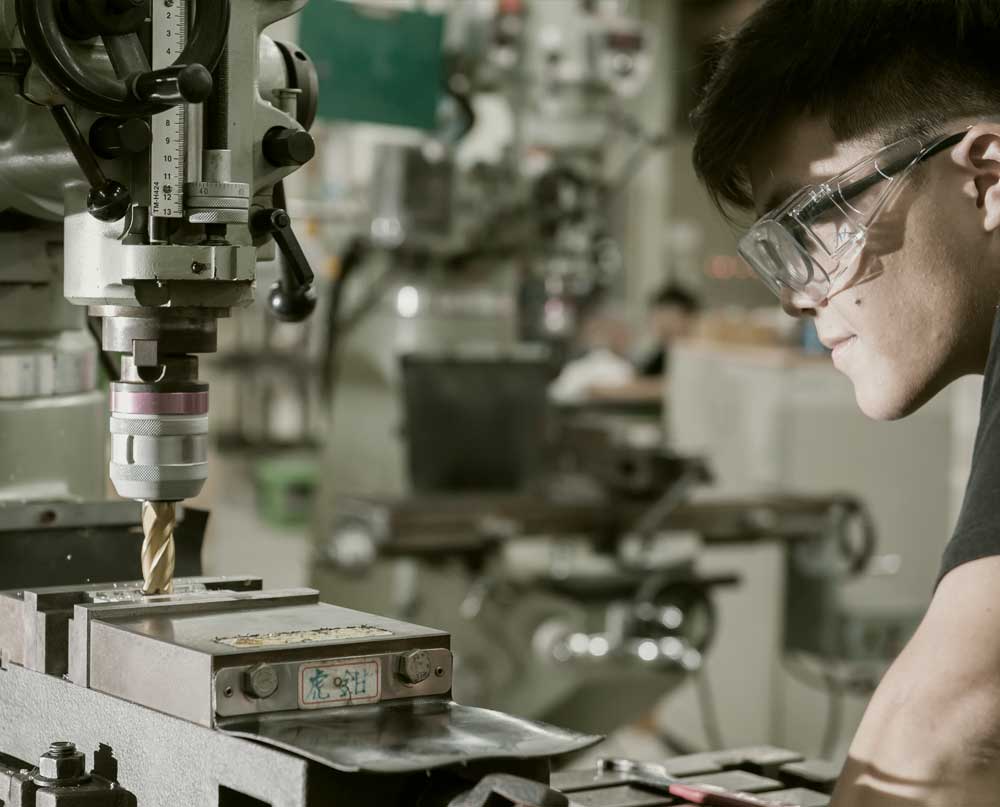 Inspired by the motto “Engineer always near engine,” the Alumni of the Department of Mechanical Engineering aspire to become pioneers for industrial development in Taiwan. (Courtesy of NCKU Introduction)