Since its establishment in 1931 as an engineering college, NCKU has endeavored to contribute to the development of Taiwan at various stages from its post-WW2 reconstruction in the 1950s, its industrialization in the 1960s, its implementation of the ten Major Construction Projects in the 1970s, its economic takeoff in the 1980s, its pursuit of democracy in the late 20th century, through its international participation amid the global pandemic in the early 20th century.

In the 1930s, as the highest institution of industrial/engineering education in Taiwan, the Tainan Technical College (predecessor of NCKU) was an alma mater of many influential engineers and technicians after WW2. Upholding the reputation of being “cool-headed, broad-minded, and swift-footed,” these engineers became an unswerving force for Taiwan’s industrial development.

Around the later years of WW2, most alumni of Tainan Technical College (predecessor of NCKU) started their careers in Japanese-run corporations, including the Railway Bureau, Taiwan Governor-General; the Postal Division of the Department of Traffics, Taiwan Governor-General; and Teikoku Oil Co., Ltd. Among these alumni, those employed at Taiwan Power Company (Taipower) were especially crucial for restoring Taiwan’s power supply system after WW2. Yun-suan Sun, the Chief Engineer of Taipower at the time, praised them as “the unsung heroes who helped establishing Taiwan’s electric power industry.”

The key factor in the persistent economic growth of Taiwan was the stable increment of infrastructure.In the 1950s, the government endeavored to implement land reforms to optimize agricultural production while promoting agricultural modernization and economic development through the construction of an island-wide infrastructure, including roads, bridges, dams, power plants, and utilities for natural resources development under the US aid program.

Among the state-owned enterprises, Taipower was given priority to receive a subsidy from the US-Aid program for the construction of the Tianlun Power Plant in the Dajia River area. Throughout the project, many NCKU alumni specializing in the fields of hydraulic engineering, civil engineering, mechanical engineering, and electrical engineering made great contributions to the cultivation of water resources around the area, including land surveying and mapping, as well as the construction of dams and hydroelectric power plants.

In 1988, Dr. Han-Min Xia, former President of NCKU, assumed office as Chairman of the National Science Council (NSC) under the Executive Yuan. During his term, NSC received approval for its National Space Science and Technology Development Long-term Plan. The most difficult task in this 15-year project was to launch artificial satellites.

In 1998, the ST-1 artificial satellite was launched, marking a milestone of satellite communication technology development in Taiwan. As the Director of the Directorate General of Telecommunications, Yao Chen, alumnus of NCKU, was the overseer to this auspicious moment. This ST-1 satellite, which is jointly controlled by Taiwan and Singapore, is the main hub of important nation-wide transmissions, including the Ministry of National Defense, the Central Weather Bureau, disaster-relief telecommunications, and navigation systems.

The 1970s saw Taiwan suffering from a series of setbacks internationally and domestically, beginning with Taiwan’s withdrawal from the United Nations in 1971, followed by the severance of diplomatic relations with Japan in 1972, and the Oil Crisis in 1973. Amid these difficult times for Taiwan, the Taiwanese government launched the Ten Major Construction Projects to construct an array of national infrastructure for transportation and industrial development, including National Highway NO. 1, railway electrification, the Chiang Kai-shek International Airport (later renamed Taiwan Taoyuan International Airport), a modern steel mill, a nuclear power plant, and other construction projects.

In terms of hydraulic infrastructure, the Tainan Hydraulics Laboratory became a paradigm of water resource engineering simulation after its success in the model simulation test conducted for the Port of Keelung in 1957. Since then, it has continued to perform simulation tests for reclaimed lands and harbors, large and small, including Su-ao Port, Taichung Port, and Taipower’s coastal nuclear and thermal power plants. The Tainan Hydraulics Laboratory, along with the alumni of the Department of Hydraulic and Ocean Engineering and the Department of Civil Engineering, work to secure public safety in Taiwan in regards to hydraulic engineering.

Participating in the Construction of the Taiwan High-Speed Railway and Freeway No. 5; Making Plans for Transportation in the Next Hundred Years

Amid Taiwan’s economic development in recent decades, NCKU alumni have continued to participate in major national constructions, such as the Taiwan High Speed Railway, Freeway No. 2, Freeway No. 5, and the Railway’s South Link Line. Outstanding alumni, such as Jaw-yang Tsay, Yao-chi Kuo, and Chi-kuo Mao, have successively served as the Minister of Transportation and Communications in charge of policy-making for the development of transportation in the next hundred years.

Whenever there is a need for construction in Taiwan, there will be NCKU alumni. With unyielding professionalism and a pragmatic attitude, they will overcome thorny challenges and complete missions to facilitate national development towards a better future.

A photo of NCKU alumni working in key positions at the Taiwan Railway Corporation and making vital contributions to railway construction. (Courtesy of Yu-Hsiu Su) 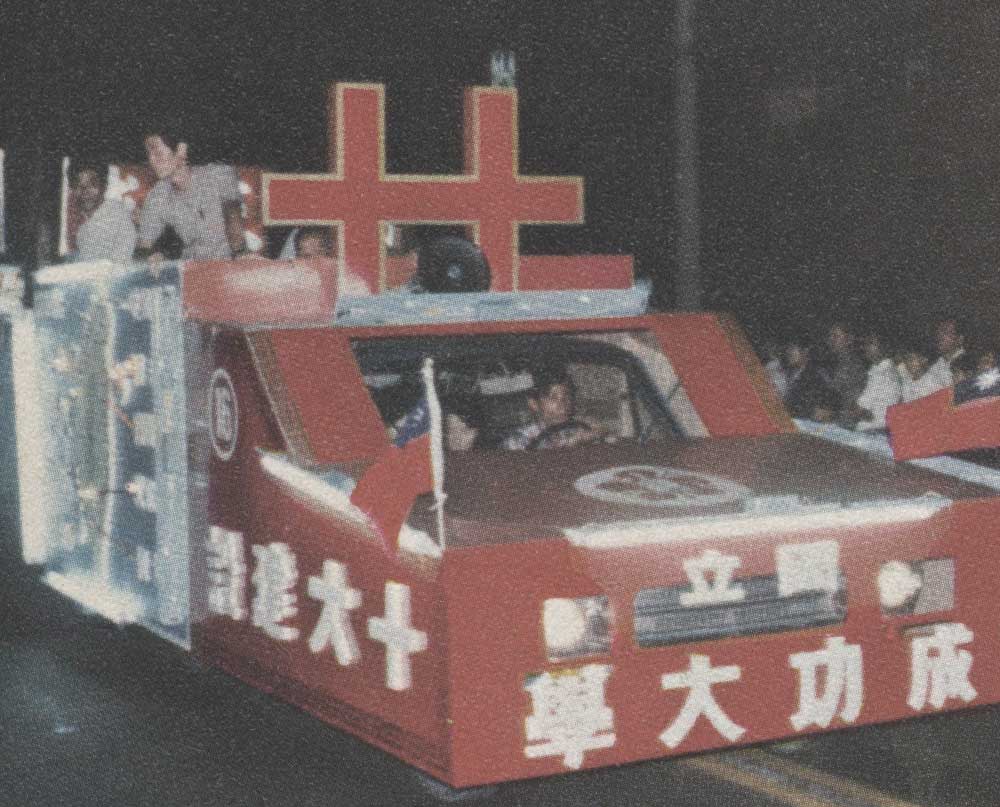 A photo of NCKU members promoting the Ten Major Construction Projects during the Double Ten Day Parade. (Duplicated by NCKU Museum from the NCKU Class of 1978 Yearbook) 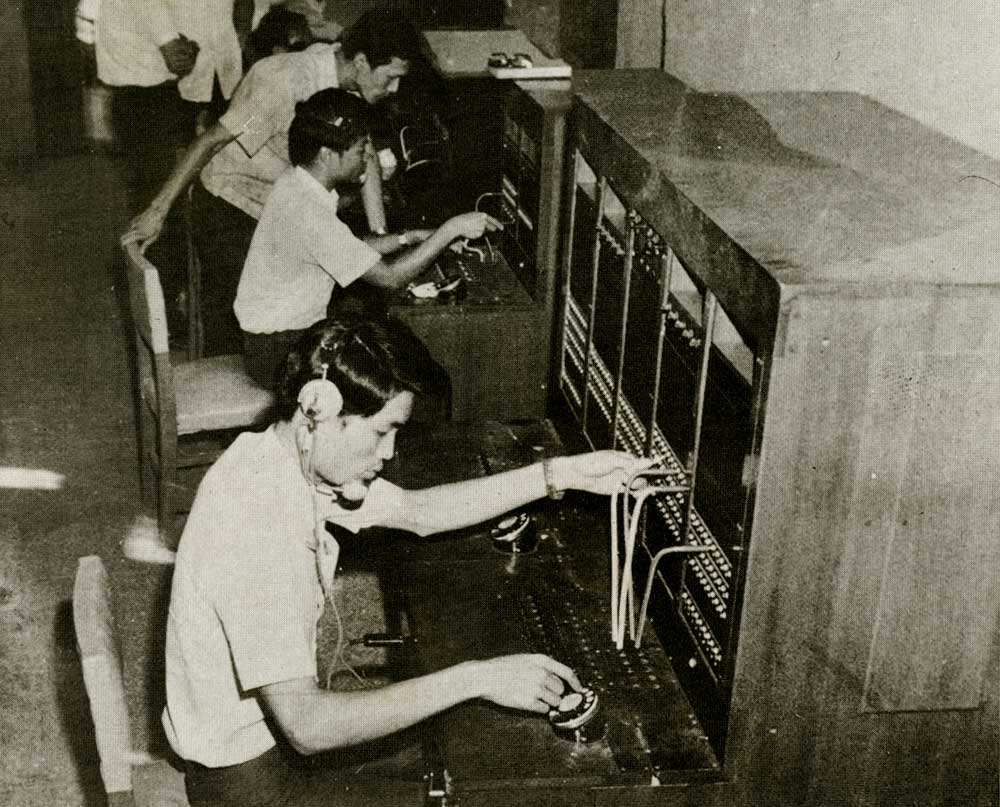 The Telephone Laboratory in the Department of Transportation and Communication Management Science. (Duplicated by NCKU Museum from the NCKU Yearbooks for Class 1971 & Class 1972)